Ben Nevis is the tallest peak in Scotland, and in fact, the tallest peak in all of the United Kingdom, at 4,414 ft. Its name has been shortened form the Gaelic Beinn Nibheis which means “Mountain with Its head in the Clouds”, which is a perfect description. 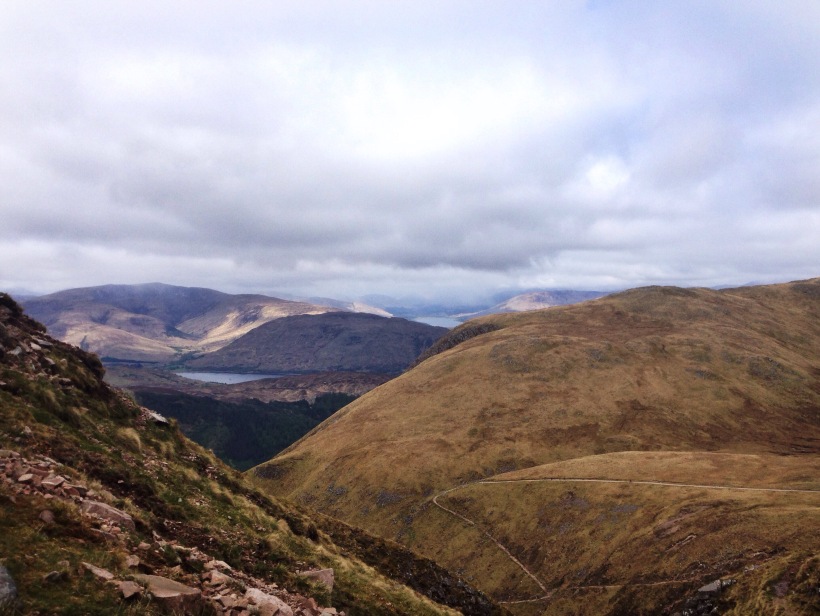 Tyler and I had set out in February (with our ascent of Mount Snowden in Wales) to complete the “Three Peaks Challenge” and hike the tallest peaks in England, Wales, and Scotland, so our second ascent took us to Ben Nevis in Scotland. The hike starts nearly at sea level, so the climb is nearly 4,000 feet, meaning that it is the longest and most difficult of the three peaks. We were lucky with the weather, it was chilly but not wet or windy, and the trail was dry. The hike was almost all stone steps, which is a good thing, as the mountain attracts almost 100,000 visitors a year. We decided on this hike that Tyler and I are ideal hiking partners. We seem to set a good pace together, not fast, but steady and consistent. Our breaks are short, and we usually talk the whole time, although I think we mostly do that because even when we’re not in Montana, Hiking=BEARS.

The trail leveled out for a bit and we had amazing views of Glen Nevis, right at the base of the mountain, as well as an imposing view of just how steeply the trail would climb from there. Shortly afterward, we started to encounter snow fields, which were wet and slushy from being trod on, although for us this just means more things to laugh about. The mist set in during the last half mile, and even though we couldnt see anything for the rest of the hike, it was still beautiful.

Summit of Ben Nevis is the dome of a collapsed volcano, on which rests an observatory that was built in 1883, and which remained active until 1904. The geology would have been fun to study, but unfortunately we were standing on 7 feet of snow!

On the hike back down we passed a group of men about our age who were about halfway up, none of them were doing very well. One of them was carrying a pint of whole milk, and he kept drinking out of it as he hiked. I cant think of anything that would sound worse during a hike than milk. I don’t even know what to say, or why Im telling you this, but it really surprised me. In fact, we’ve summited two more mountains since Ben Nevis, and each time before we started I jokingly asked Tyler if we remembered our pint of milk.

Somehow, we dont know how, it took us the same amount of time to get down as it did to go up. I still think we must have gone through a stargate or something and lost an hour of our lives.

All in all, Ben Nevis was an amazing hike-if you ever get the chance to do it yourself, take it!